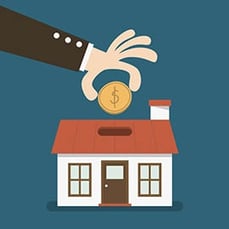 Queenstown properties have cracked the million dollar mark for average values, putting them on par with Auckland.

But the latest QV property values for November show that the heat is starting to come out of the flourishing Wellington property market and other markets ahead of Christmas.

Nationally, the average value of a New Zealand property is now $624,675, just over 50 per cent higher than the previous market peak in late 2007.

QV spokesperson Andrea Rush said it seemed a fresh round of "LVR" or loan to value ratio" restrictions on mortgage lending had contributed to a weaker than normal spring.

"While values continue to rise in most parts of New Zealand, the trend of a slowing rate of growth continues for Auckland, Hamilton, and Christchurch."
In the Auckland region, it was "a tale of two markets," according to QV general manager Jan O'Donoghue.

O'Donoghue said there was still strong demand in the $1.5 million- plus bracket and the new build market, which was pushing prices higher.

"But at the same time there's been a significant reduction in demand for entry level investor housing stock, particularly in Manukau over the past month.

"Sales prices for this type of property have reportedly dropped back by as much as 20 to 30 per cent on what was being achieved earlier in the year."

However, there has been a late surge of much-needed new listings coming onto the market from buyers wanting to sell prior to Christmas, creating the sense that it was "more of a buyers' market" in some areas than it had been all year.


Since the US elections, there had also been reports of more buyer inquiry in Auckland from foreigners looking to relocate and also Kiwis living abroad looking to return.

Meanwhile, the South Island tourist town of Queenstown had followed Auckland's lead into million-dollar territory, recording a massive 32 per cent rise in values over the past year.


In contrast, the Capital's previously "very buoyant" market was starting to feel the effects of the new lending rules.

Home values in the wider Wellington region rose 20.6 per cent year on year and 5.5 per cent over the past three months, giving an average of $565,631.

QV valuer David Cornford said it was too early to tell how much of that was due to the earthquake, which froze some sales as insurers refused to roll over insurance cover from vendor to buyer.

"Most insurers are refusing to offer new cover to buyers until they can provide a new builders report completed after the earthquakes which means a number of deals have been stalled. It seems to be business as usual now, providing a builders report has been sighted."

Regional centres with entry level properties under $300,000 were still in strong demand and price growth in many cases such as Hawke's Bay, Rotorua, the Hauraki and Waipa Districts and Dunedin.

In Christchurch City, houses had ticked over the half a million dollar mark, up 4.3 per cent year on year to $501,229.

Rush said latest research showed the new LVR restrictions had not yet led to a major decline in multiple property buyers in the Auckland market, which had remained at 43 per cent since the measures were introduced.