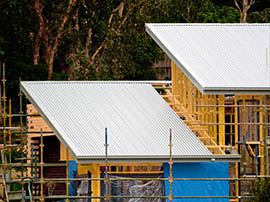 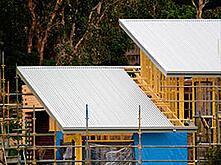 Fletcher Building has met its guidance with a five per cent gain in full-year earnings before one-time charges, as strong growth in its biggest market of New Zealand offsets a weaker performance in Australia and the rest of the world.

Net profit fell 20 per cent to $NZ270m after $NZ150m of one-time charges for plant closures and impairments.

Fletcher's $NZ150m of one-time charges in the latest year included a $NZ78m impairment of goodwill relating to its Forman, Stramit, Tasman Insulation and Humes businesses.

Operating earnings before one-time items in New Zealand rose 24 per cent in the latest year, accounting for 69 per cent of the group total, while in Australia earnings fell 30 per cent and for the rest of the world by seven per cent.

"The New Zealand construction market was strong across the residential, commercial and infrastructure sectors, and we experienced strong volume growth in most of our businesses," chief executive Mark Adamson said.

"Conditions in Australia were much more mixed, with a buoyant residential construction market but weak conditions in the mining, resources and infrastructure sectors.

"Operating earnings beyond New Zealand and Australia were lower, with continued weak conditions in Europe and a more difficult trading environment experienced in China but a strong performance from Formica in North America."

Separately on Wednesday, Fletcher said it has conditionally agreed to sell the operations of Rocla Quarry Products to Hanson Construction Materials in a deal valued at about $A203m.

The company expects a pretax gain of about $A100m on the sale, which requires Australian regulatory approval.