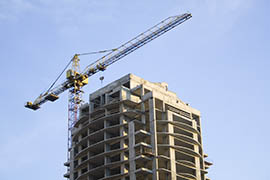 The average asking price for apartments and units in Auckland has crossed the half-million dollar mark, according to Trade Me Property figures.

Trade Me's Property Price Index for May shows the door is continuing to close on buyers trying to get their foot on the property ladder with less than $500,000 to spend.

Trade Me property boss Nigel Jeffries said Auckland continued to surge and was yet to show signs of slowing down.

While first-home buyers had been looking at apartments and units as an option, they were now going to find it "increasingly difficult".

Units in the country's biggest city have seen similar growth, with average asking prices of $509,250 in May compared to $318,100 five years ago.

One to two bedroom homes in Auckland are now priced higher than the average for all homes across the country.

The national average asking price fell slightly in May, to $535,250.

At the other end of the spectrum, Hawke's Bay was down 3.1 per cent on a year ago, and Otago was also down slightly.

The Property Price Index analyses new listings for sale over the past three months.