END_OF_DOCUMENT_TOKEN_TO_BE_REPLACED

The resurgence in the Australian property market has continued in October, with dwelling values increasing in all states except Victoria.

Overall the national property market increased 0.4 per cent last month according to the latest data from CoreLogic.

After five months of decline, CoreLogic’s national home value index has started to turn around, helped by a combination of low interest rates and aggressive support from the Federal Government.

The strongest performers have continued to come from the smaller capital cities with Hobart, Canberra, Darwin and Adelaide all increasing in value by more than 1 per cent last month.

The best-performed cities were Darwin and Adelaide, increasing in value by 1.2 per cent.

While Sydney values have started to rebound after declining over the past few months, up 0.1 per cent for October. 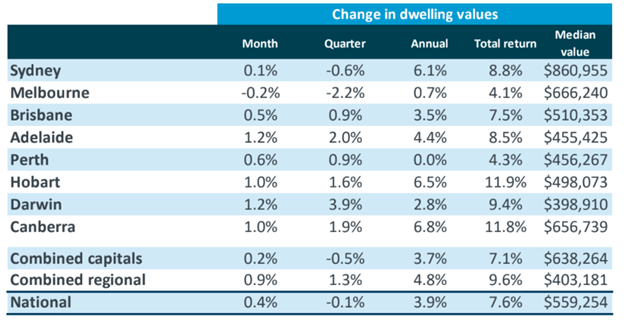 Most of the attention has been on what happened in Melbourne over the last few weeks as the lockdowns have slowly begun to ease.

The impact has been quick with listings surging and auction activity starting to build momentum. However, house prices fell by -0.2 per cent.

Over the last quarter, where Melbourne had been in hard lockdown, house prices were down just -2.2 per cent and are still higher by 0.7 per cent on an annual basis.

Across the entire country, house values are down only 0.1 per cent for the quarter, highlighting just how robust the Australian housing market really is.

Over the last seven months, since the lockdown measures first started coming into place across the country, national values have only fallen by 2.6 per cent.

One of the clear trends that has occurred throughout COVID has been a move away from CBDs and into the regional areas.

This was again highlighted by the house prices increasing 0.9 per cent in regional areas in October, while for the quarter, prices are also 1.3 per cent higher.

Regional vales have rebounded strongly after initially showing weakness in the early stages of COVID.

One of the key reasons for property prices remaining strong has been the low number of listings across the country.

Learn more about supply and demand in property investment here.

Listings are on the rise, increasing 25 per cent over the past month, helped by Melbourne slowly starting to reopen.

However, the numbers are sharply lower than the same time last year. 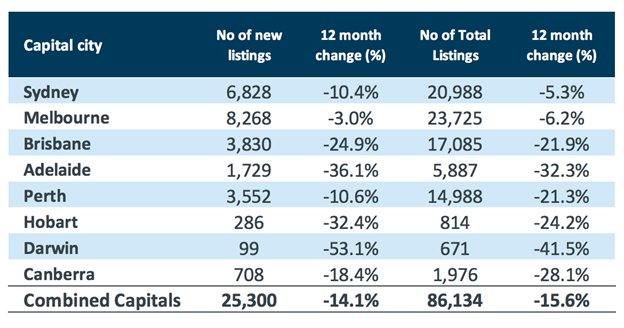 This has also kept auction clearance rates elevated, with the national preliminary clearance rate coming in at 77 per cent over the weekend, up from 73 per cent a week early.

Once again it was Melbourne that has started to help boost auction activity as both pent up buyers and sellers, look to start auction campaigns before the traditional Christmas period.

Interestingly, both the clearance rate and total auctions are actually higher than at the same time last year.

What is Percentage of Vendor Discounting?

Understanding the level of vendor discounting in an area is important as it can help you determine the level of demand for property in the area.

While the pace of house price growth might be slowing, property markets are clearly still in a strong bull market.

Policy actions during COVID The Reserve Bank of Australia (RBA) has taken a number of complementary policy actions to support the Australian economy since the onset of COVID. The RBA has lowered its policy interest rate to near zero, set a target for the 3-year government bond yield, enhanced its forward guidance, commenced a program of purchasing government bonds and provided long-term low-cost funding to the banking system. I will explain each of these actions in more detail shortly.