END_OF_DOCUMENT_TOKEN_TO_BE_REPLACED

House prices across the nation have carried on where they left off last year, with values increasing in January.

According to the latest data from CoreLogic, house prices were up 0.9% across the country in January, putting them 1.0% higher than when the pandemic officially began.

Once again, it was Darwin that has shown strong price growth to start the year, increasing by 2.3% in January, taking the annual growth rate 11.4% making it the strongest capital city market in the country over the past 12 months.

Meanwhile, Perth, Hobart, Brisbane, Adelaide and Canberra have all seen a strong start to the new year, with increases ranging from 0.9% to 1.6%.

Sydney and Melbourne, the two cities that have been hardest hit with lockdowns, continue to trail the other capital cities seeing growth of 0.4% in January. Notably, Melbourne is only -2.1% lower over the past 12 months, after the property market was hit with the toughest lockdowns in the country. 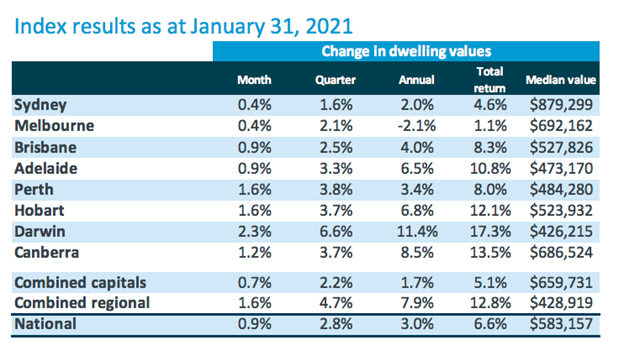 One of the clear trends in 2020, was the move towards regional areas and away from the larger capital cities. This is a trend that appears to be continuing to start 2021, highlighted by regional values rising 1.6%, compared to the capital cities that saw just a 0.7% increase. Regional markets are also 7.9% higher over the past 12 months.

CoreLogic notes that the moves towards the regions have been particularly pronounced in Sydney and Melbourne.

CoreLogic’s Head of Research Tim Lawless notes that there are a number of fundamental factors behind the numbers.

“Internal migration data shows more people are leaving Sydney and Melbourne for regional areas, resulting in a transition of activity from the metro regions to the outer fringe and regional markets.

This demographic trend is further compounded by the demand shock of stalled overseas migration. As Melbourne and Sydney historically receive the vast majority of overseas migrants, these metro areas have been the hardest hit by this demand shock.”

“Better housing affordability, an opportunity for a lifestyle upgrade and lower density housing options are other factors that might be contributing to this trend, along with the new found popularity of remote working arrangements.”

When COVID first hit in early 2020, a number of major banks and property experts began predicting that house prices would see falls as much as 32% across the country.

Now that we’ve had nearly 12 months of house prices data, it’s clear that these numbers were a long way off the mark. As it now stands, house prices are 1.0% higher than they were pre-pandemic with only Sydney and Melbourne yet to fully recover. 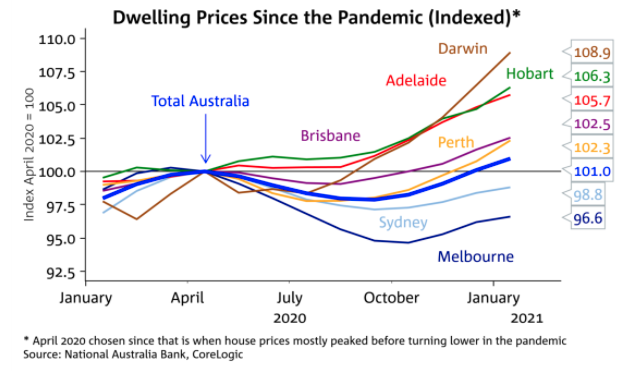 Tim Lawless also suggests that property markets across the country are now predominately in a seller’s market, highlighted by strong demand and tight supply levels. 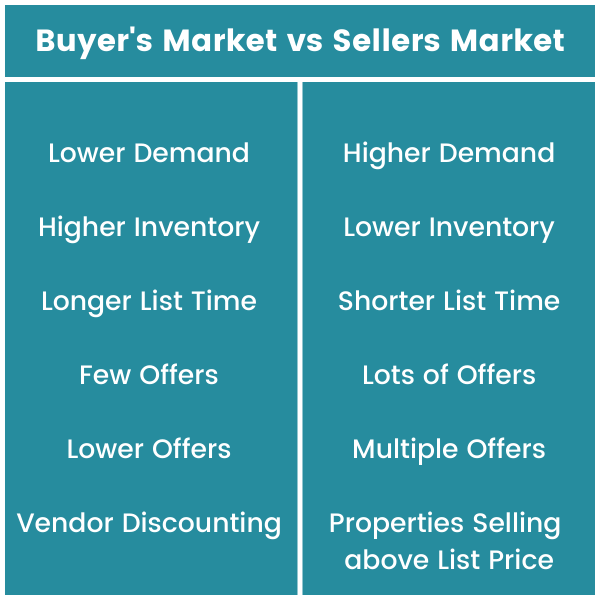 “This is a seller’s market, but for some reason, we are still seeing below normal vendor numbers across most markets. With sentiment rising and selling conditions favouring the vendor, it is reasonable to expect new listing numbers will rise as the year progresses which may help to temper housing market conditions.”

Across the country, total listing numbers, are 27.8% lower than this time last year, tracking 29.3% below the five-year average.

This week, RBA Governor Lowe also noted that he expects interest rates to remain at current levels into 2024, putting upward pressure on house prices for the foreseeable future. What is Percentage of Vendor Discounting?

Understanding the level of vendor discounting in an area is important as it can help you determine the level of demand for property in the area.

While the pace of house price growth might be slowing, property markets are clearly still in a strong bull market.

Policy actions during COVID The Reserve Bank of Australia (RBA) has taken a number of complementary policy actions to support the Australian economy since the onset of COVID. The RBA has lowered its policy interest rate to near zero, set a target for the 3-year government bond yield, enhanced its forward guidance, commenced a program of purchasing government bonds and provided long-term low-cost funding to the banking system. I will explain each of these actions in more detail shortly.