END_OF_DOCUMENT_TOKEN_TO_BE_REPLACED

Despite experts suggesting house prices were going to see a sharp contraction in 2020, the latest data indicates the opposite has occurred.

According to CoreLogic, house prices increased in value across the country in 2020, finishing the year 3.0% higher across the nation.

In December, the capital cities increased in value by 0.9%, with Darwin the standout performer, finishing 2.3% higher for the month. While Perth, Brisbane and Adelaide all increased by 1.1%.

Both Sydney and Melbourne, cities that have been hardest hit by lockdowns throughout 2020, both saw strong gains of 1.0% and 0.7% respectively in December, as Australia’s two major property markets continue to turn the corner.

Over the course of 2020, there was also a clear push towards the regional areas and that was also reflected in the data from CoreLogic.

In December, house prices in the regions increase by 1.6%, while over the course of the year prices surged by 6.9%.

Areas along the central coast, regional QLD and areas that are within a few hundred kilometres of the capital cities, have seen of the most interest in 2020, as people started to look to avoid CBDs amid ongoing lockdowns and a move towards working remotely.

While house prices have turned around, many capital sites are still seeing dwelling values that are well off their record high levels.

According to CoreLogic, four of the eight capitals are still recording dwelling values lower relative to their previous peaks. 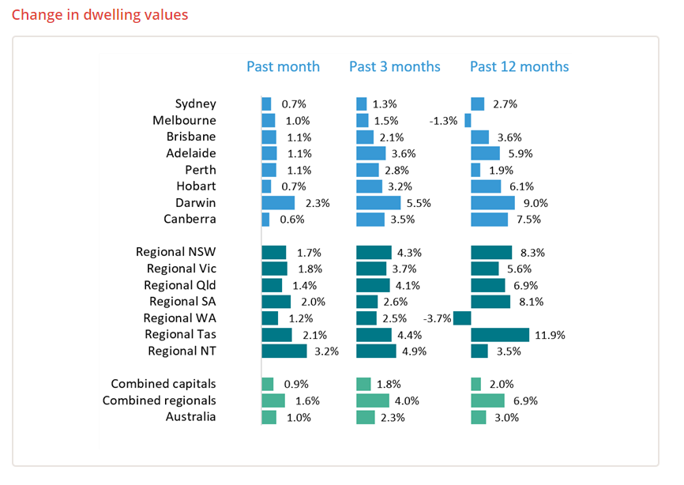 One of the reasons that house prices have held up strongly over the course of 2020, is because of reduced listings and transactions volumes.

Early in 2020, transactions fell by around 40%, when early COVID lockdown measures started to take place in March and April. However, by the end of the year, transaction volumes had recovered, to the point that by the same point in time in December, transactions were 8% higher than 2019.

The same recovery was also seen with listing volumes that are still on the increase. When COVID first hit, many people chose to not list their homes and took a wait and see approach. Comparatively, in November 2020 there were approximately 165,000 fewer properties available for sale compared to the same time last year.

According to CoreLogic, one of the key reasons for the recovery in house prices has also been the moves by the RBA to quickly slash interest rates to record low levels. The year ended with the official cash rate sitting at 0.1%, and mortgage rates now under 2% for the first time.

The interest rate cuts have changed the dynamic, whereby it is now cheaper to buy than rent in many areas.

Along with a host of Government incentives such as building bonuses and stamp duty relief, first home buyers have been one of the most active segments of the market which has helped boost house prices.

Although the property market still remains strong, CoreLogic does note that there are still downside risks worth taking into account, including the end of the Federal Government Stimulus programs such as JobSeeker and JobKeeper as well as mortgage holidays coming to an end.

When Should You Buy or Sell Off-Market?

Over the past 12 months, we’ve started to see a lot more interest in both buying and selling property off-market.

Australian House Prices Rising at the Fastest Rate in 32 Years

The exceptionally strong growth in house prices shows no sign of slowing down with the latest data from CoreLogic showing dwelling values are rising at the fastest rate in 32 years.